The Washington Post recently sports a new slogan: “Democracy Dies in Darkness.”
It has been reported that Bob Woodward, the legendary reporter of Washington post who was part of the investigative reporting team that resulted in the resignation of President Nixon, is in favor of this new slogan too.
I think I can understand why the Post chose such an alarming slogan. In recent years the depth of the knowledge of people decreased. People spent more and more time in their field of the work and many different things – from digitization and competitions and also the lack of the trust and rise of social Medias – gave hand to hand to keep people uninformed.
The not well-informed voters could give power to the people who don’t care about truth or facts or reality and they can trick the voters easily. When the methods of marketing meet with the political agenda and you combine them with the power of voters who can’t find or recognized reliable sources from fake ones, then you have a perfect recipe for nightmare… and of course that the darkness will be inevitable and in that darkness, the democracy would be just one of the victims.
But the story has another side too. In some countries like U.S., the setting of the reality is based upon the principle of democracy and freedom of the press. So this is the day and people should be worried about the coming night.
For some of us, we are living in the night. Press doesn’t enjoy the protection; sparks of freedom was destroyed time after time. The uprising to reach to a democratic society was hijacked over and over again.
Some of us are living on a dark night.
It is hard and scary but also gives you some edge in some perspectives. Living in the dark, make your eyes more sensitive. We look to the sky and see the stars and see them as beacons of hope and lightness.
We are living on the other side of the world, where we should be worried about dancing flames of candles. Every simple light can help us to get a step closer to the morning.
It is a hard way to go. But there is no other way. If there is a hope I believe it is trough the informed people. People who know the world and know how it is working and more important remember the flame of curiosity in their mind and let it get brighter and brighter.
We are going to fight against darkness with whatever we have and you should be trying hard to keep your day is going stay bright.
Maybe we meet on the half way in a world that would be free from ignorance and darkness.

An Interview with Andy Weir

When the role of citizen journalists overrated and lead to catastrophe   In last few days, Tehran, The… 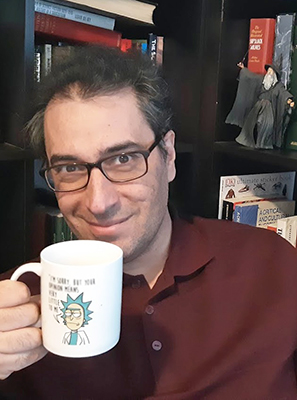 The Martian was a hugely successful for And Weir and

When the role of citizen journalists overrated and lead to