The Night Sky, The Forgotten Nature: Uncovering the Impact of One Television Programme on Astronomy Communication in Iran

The programme, which explores astronomy and space science, became one of t 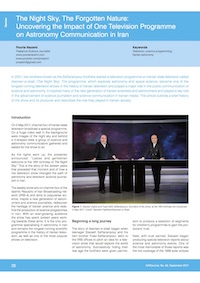 he longest-running television shows in the history of Iranian television and played a major role in the public communication of science and astronomy. It inspired many of the next generation of Iranian scientists and astronomers and played a key role in the advancement of science journalism and science communication in Iranian media. This article outlines a brief history of the show and its producer and describes the role they played in Iranian society.

Here is my review of this program which published in CAPJournal. You can download it from here.

Fight against science journalism and information in Iran

Recently, result of a study published about the sexual harassment against the women journalists in Iran. The study…

My name is Pouria Nazemi and I am a freelance science journalist. I born in Iran, and I am living in Ottawa, Canada.

JCPOA, comparing the coverage of Iran and US

Falconry; This is the name of a sport and ancient method of hunting. In this method, hunters are using trained …

I wrote the following article, 4 years ago for AWB (Astronomers Without Borders) and thought that maybe still interesting for someone. …

“I spent an hour and a half in one of

Recently, result of a study published about the sexual harassment